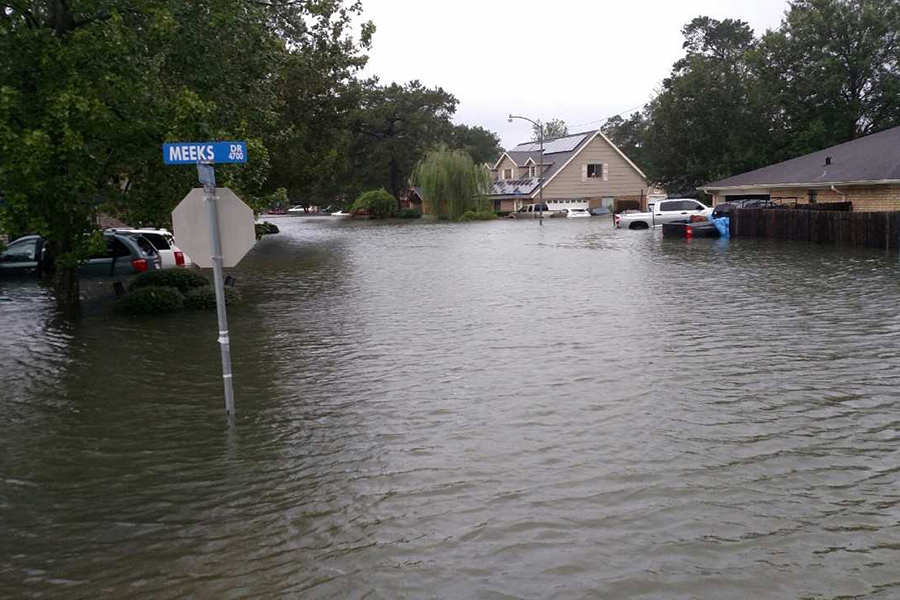 It was so sudden and nobody believed it would happen. No one imagined they would have to wade through waist-deep water, the clothes on their back as their only possessions left – everything they worked their whole life for washed away in the blink of an eye. However, this was the sad reality for many Texans, including math teacher Elizabeth LeBouef and her family.

The rain flooded their home, took many of their belongings, and forced them to be rescued. According to LeBouef, she is usually in denial and never thinks a hurricane will hit them, so she thought the same this time around.

“After Harvey hit Port Aransas and came back out into the gulf, I realized we might need to leave,” shes said. “But by then, it was too late. Half of Texas was evacuating, and who knows how far we would have to drive to find a hotel. So we were stuck. AND I was still in denial. Jimmy, my husband, is a cop, so he is at work 24 hours a day during a storm, so my daughter Meredith and I were at home alone. We couldn’t sleep so we sat up waiting for the water.”

Around 2 a.m., the water started creeping into their home and in just a couple of short hours, it was thigh high. LeBouef and her daughter began packing up whatever they could salvage.

“Meredith and I began gathering a change of clothes and got our two cats into one cage,” LeBoeuf said. “We didn’t pack more than we could carry. Jimmy called our neighbor who has a two-story house and they said to come over. By now, the water was waist deep. We stayed at the neighbor’s house until around noon when some very nice guys from Deweyville came by with a flat-bed boat and loaded us up.”

From there, they were boated to International Apartments and then walked down Clark Road to get to a shelter at North Orange Baptist Church, which was overflowing with people and had no power. LeBouef and her daughter spent most of the day outside under a covered drop-off area since it was so crowded inside and they still had their two cats with them.

I have never seen so much water in my life.”

“Many of the people out there were from our neighborhood and were very nice,” LeBouef said. “Around nine that night, they loaded up all of the people still there and sent them to another shelter in Lake Charles. But around the same time, Jimmy was finally able to send someone to pick us up. My brother-in-law got us out of Orange and brought us to Beaumont literally an hour before I-10 was covered with water. I have never seen so much water in my life.”

Since the storm, LeBouef said she has learned more than she has ever wanted to about how to rip up carpet, knock out drywall, gut a bathroom, and remove chair tack, floor boards and paneling. She has also learned how to throw things away – no matter how important they are.

“From now on, if it sprinkles too hard, we are evacuating,” she said. “I felt like the worst mom on earth. I had to wade through waist deep, filthy water with my daughter. Then I had to load her onto a boat and spend the day at a shelter with no power and little food. It was emotionally overwhelming. It was the most horrific experience of our lives.”

According to LeBouef, her family ended up getting three feet of water in most of the house and a little more in her daughter’s room. So far, they have had to remove dry wall and insulation four feet high.

“All of our furniture was ruined, along with clothes, shoes, etc..” she said. “And all three cars flooded too. Luckily, we were able to save our large photos and Meredith’s artwork because they were hung more than three feet up. Those were the first items we rescued. We were really able to save a lot of our stuff – just not the big items.”

Right now, the family is waiting on FEMA to inspect their house and tell them how much money they will receive. LeBouef said they have already talked to a contractor and are just waiting on insurance so they can get started on rebuilding their home. Even though Harvey may have put them to the test, she and her family are trying to stay positive and are glad they are able to stay at her mother’s house.

“I walked into a house covered in trash and wet junk everywhere,” LeBouef said of first seeing her home after the flood. “And it smelled horrible. It was devastating to see 12 years of my life and our hard work ruined. But we had lots of friends and family help us gut our home. For a few days, I was actually jealous of my neighbors’ trash piles. But eventually, my pile was bigger than theirs. And I was part of the cool kids club! Now we are excited when we see the trash guys pick up our junk. Hopefully we get the house done before the end of school, and we will end up with a mostly brand new home!”

Imagine anticipating your last first day of school and then having it taken away, along with your home and belongings. Senior Bayleigh Swanton travels 45 minutes to school every morning just to go home to a place she does not recognize. On Aug. 25, Swanton and her family evacuated early to Sam Rayburn Lake because of the approaching Hurricane Harvey. She expected to be there for only two days, b...