A passion to play 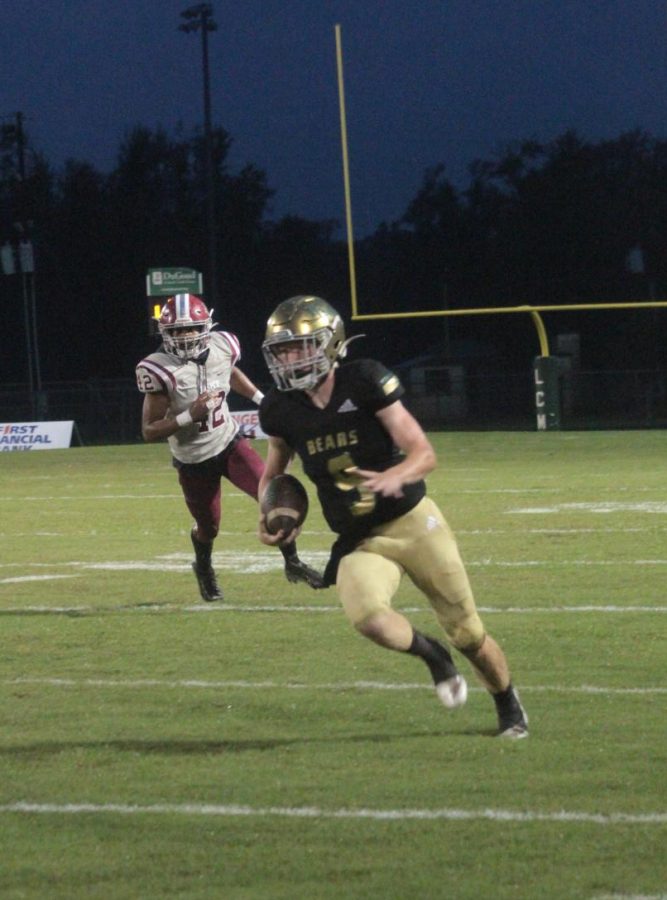 Senior Ashton Landry runs the ball for the Bears during a game against the Jasper Bulldogs.

When people are passionate about something in life, like playing sports, it can be scary when it potentially gets taken away. While some may get scared or shut down when this happens, senior quarterback Ashton Landry only grew more motivated to overcome his challenges when faced with health problems last year.

During his junior year, Landry was diagnosed with a heart condition called Wolff Parkinson White Syndrome, which causes a person’s heart to beat abnormally fast for periods of time.

He first started having symptoms last year during baseball season and his symptoms were most noticeable during baseball games and at night when he was trying to sleep. After a restless 24 hours of not being able to sleep and the room spinning, which made him feel nauseous, Landry’s mom decided to pick up an EKG to check things out. They later discovered that he had Wolff Parkinson Syndrome and that he could have surgery to help improve his condition.

“It affected my personal life because I could not really do anything without my heart rate being super high, so I would stay home,” Landry said.

At first, Landry was concerned about being able to finish his high school sports career, as he plays both baseball and football.

“(The hardest obstacle) was not knowing if I would ever be able to play sports again,” Landry said.

In June, Landry had what is called an ablation, which is a form of open-heart surgery where doctors break up electrical signals that cause irregular heartbeats.

After his surgery, Landry was concerned about getting back into shape after being out for two months, but as of now, he said he feels great. Even though the condition could reoccur in the future, it is rare for that to happen.

“I am blessed to have gotten the surgery,” Landry said. “I have actually felt the best ever during a football season.”

As the quarterback of the varsity football team, Landry has a big role to play; therefore, it is imperative that he feels healthy and ready to lead the rest of the team.

“My goal as the quarterback is to be the best leader I can be and when things are not going our way, I want to lift the team back up,” he said.

According to Landry, one of the biggest challenges of being quarterback is keeping everyone focused. He tries to make sure he knows everyone’s job on each play, and he tries to do his best at being a leader. Landry also stays motivated with the help of new head coach and athletic director, Eric Peevey.

“Coach Peevey has brought a lot of motivation and excitement to our program,” he said.

As Landry and the rest of the Bear Football team prepare for a big game this Friday, one thing is for sure; Landry’s perspective about life and sports has changed greatly.

“I’m just blessed to get a opportunity to play football this season when I didn’t know what was going to happen with sports for me,” he said. “I’m just thankful that my family, friends, coaches and teammates have been there for me through the whole process.”