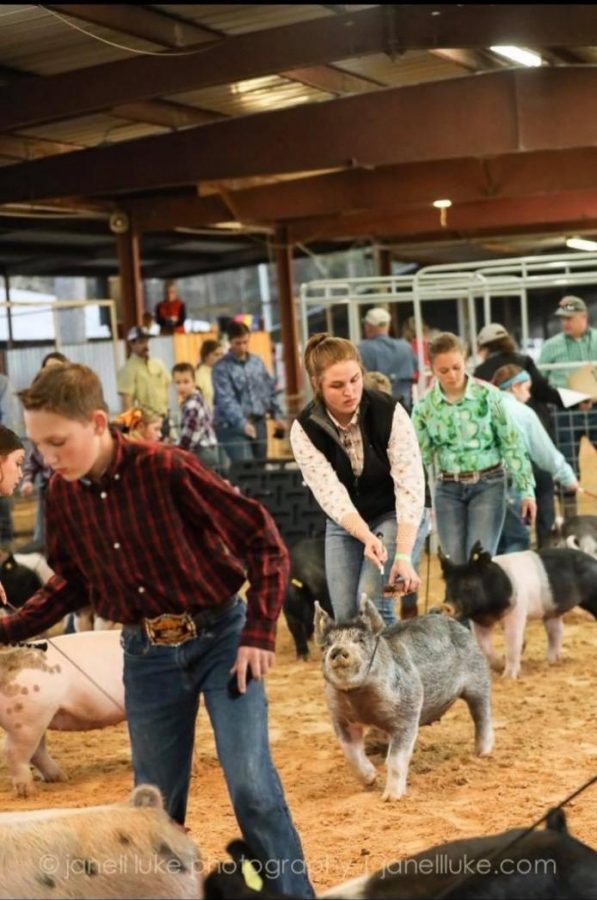 Senior Bryton Theis has been showing animals since the seventh grade.

Sticking with an extracurricular for six years can be a hard task for many, but for senior Bryton Theis, it is second nature. Theis has been showing animals since her seventh grade year and has earned over five Grand Champion titles, among other awards.

In the past, Theis has showed both pigs and rabbits but this year she is only showing pigs. To prepare her for the season, she selects her hogs about six months before the show. She spends this time working with them and teaching them daily up until it is time to show them. On the day of a show, the pigs get a bath, brushed, and then they head into the ring and Theis drives the pig, showing off its best features to the judges so they can select a winner.

“The most rewarding thing about showing animals is obviously winning but also all the time spent with friends and family preparing for the shows,” Theis said.

Theis’ daily routine consists of more than your average teenager. As soon as she wakes up in the morning, she goes to the barn to weigh out the animals’ food and feeds them and does the same thing as soon as she gets home. Once they are done eating, she individually walks each of the pigs for 30 minutes to an hour, then she plays with them separately. When the day starts to come to an end, she sprays them with their skin products, brushes them, and heads back to do any homework she might have. Between school and caring for her animals, anyone could get overwhelmed by the amount of hard work this takes, but Theis makes it a point to always let her animals know that she is there for them.

“It is a huge responsibility to raise these animals and care for them,” Theis said. “Even if I don’t feel good or the weather is bad, they rely on me to care for them.”