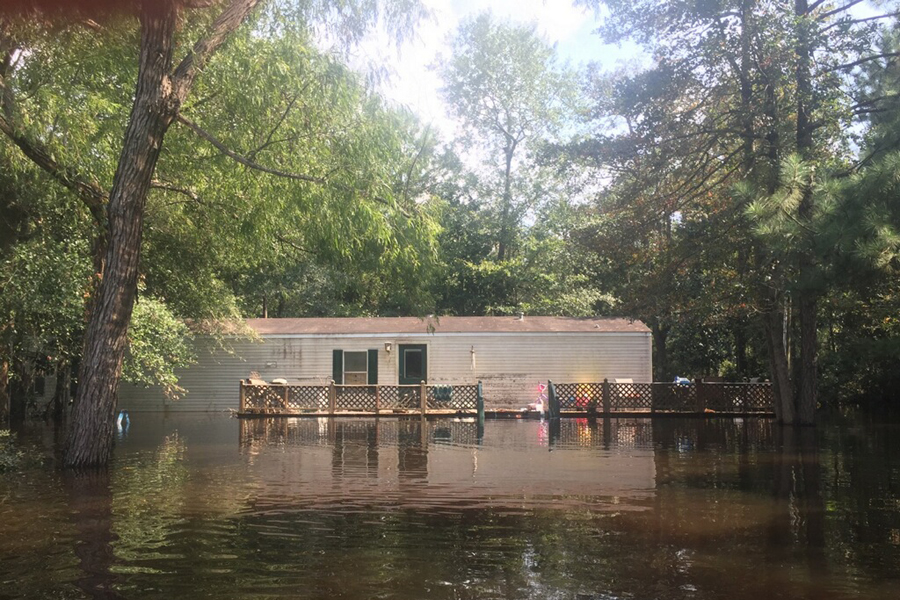 Imagine anticipating your last first day of school and then having it taken away, along with your home and belongings. Senior Bayleigh Swanton travels 45 minutes to school every morning just to go home to a place she does not recognize.

On Aug. 25, Swanton and her family evacuated early to Sam Rayburn Lake because of the approaching Hurricane Harvey. She expected to be there for only two days, but ended up staying for one week while waiting for her house in Mauriceville to drain out. The flood waters covered her roof.

“Everything in the house was damaged,” Swanton said. “The house ended up being totaled. We are currently staying in a house behind my dad’s office in Fannett. It’s an awful drive in the mornings.”

According to Swanton, the biggest trial was not just losing everything, but losing something so special. This house was a childhood home, full of great memories and momentous experiences.

“As of now, our plans for reconstruction are to totally demo the house and build up on the land,” Swanton said. “That land was the first thing my parents bought as a married couple and it was the place they brought me and my siblings home from the hospital to, and we can’t bare to part with it.”

Through this experience, Swanton said she has had a tough time adapting to her new surroundings, but is trying her best to make the most of it. This has changed more than one aspect of her life, and she is learning to be patient with the recovery.

“My whole life has changed since the flooding, but I understand others have too,” Swanton said. “It’s been hard adjusting to things, like living in a new house, but it’s becoming easier by the day. I don’t believe it has fully hit me yet. I don’t think I’ll be able to fully adjust to anything for a while.”

Her last year of high school is much different than she expected. Swanton is unsure of when her life will go back to normal, but for now she is full of hope that it will all work out.

“My parents are planning for the whole process to take six months to a year, but with the progress I’m expecting it to be longer,” Swanton said. “However, I’ll be in college by then.”

In such a short amount of time, Swanton has learned how to appreciate the little things in a time of great turmoil. This has taught her to not take for granted the comforts she had, and to be grateful for what has been saved.

“The one thing that has gotten me through all of this is just constantly reminding myself that others have it way worse,” Swanton said. “I was fortunate enough for my whole family to be safe and that’s what’s most important to me. Growing up, my mom always told me ‘We have all we need and that’s each other,’ and that has always been with me, especially now.”